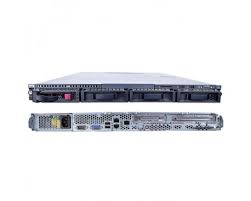 The HP ProLiant DL160 Gen6 will be A versatile and powerful dual-socket 1U rackmount machine well suited for virtualization and superior performance computing, in addition to general purpose. Even the HP ProLiant DL160 G6 can be built with up to two 64bit quad-core or two core Intel Xeon 5500 or 5600 series chips up to 288GB DDR3 RAM throughout 18 memory slots. It also has 16TB of storage around four 3.5″ approximately eight 2.5″ drive bays effective at supporting SATA, SAS, or strong country forces, providing loads of scalability and versatility in a little rackmount footprint. With double onboard gigabit NIC’s, and 2 PCIe slots, the HP ProLiant DL160 G6 has the connectivity and expandability. It is ideal for various applications like database, virtualization, hosting, file/print, anti-virus, network storage, and web, along with memory-intensive software where Rackspace can be at a premium.

This program is powered by Intel’s 5520 chipsets and supports up Into 2 Xeon 5000 processors or two Intel Xeon 5600 processors. Intel’s 5520 chipsets replaced front-side bus (FSB) structure for Intel’s rapid Path Interconnect technologies, which permits the CPU to immediately get into the system’s RAM to increase trade time. By enabling multiple threads to operate each center, Intel’s hyper-threading technology that increases processor throughput supported by many of the processor models.

This system can support up Into 18 DIMMs of documented (RDIMM) or even unbuffered (UDIMM) DDR3 memory modules. Utilizing 16-GB RDIMM memory modules inside every 18 slots will provide a maximum memory capacity of 288GB.

The HP ProLiant DL160 Gen6 could be configured to support either 4 SFF Or 2 SFF drive bays. The two four-bay and 8 – bay configurations have the area to get the optical driveway. Max storage of 12TB is attained, applying four 3TB LFF SATA drives. HPE’s intelligent Array P410 RAID controller might be updated to include things like a 512MB Battery-Backed Write Cache (BBWC), or Flash-Backed publishes Cache (FBWC), or even 1GB FBWC.

Two expansion slots have been provided on the HP ProLiant DL160 G6 server. The First slot confirms PCI-E technology and also will be configured as a Half-length/full-height or even full-length/full-height slot. A second expansion Slot, with a low profile form variable, is furnished in both the hotplug and No-hot plug-in models. Still, on the alluring plug model, it is inhabited from the SmartArray P410 controller. This system supplies one to 5 USB interfaces and inner Remaining four split between the back of your chassis and also both the front.