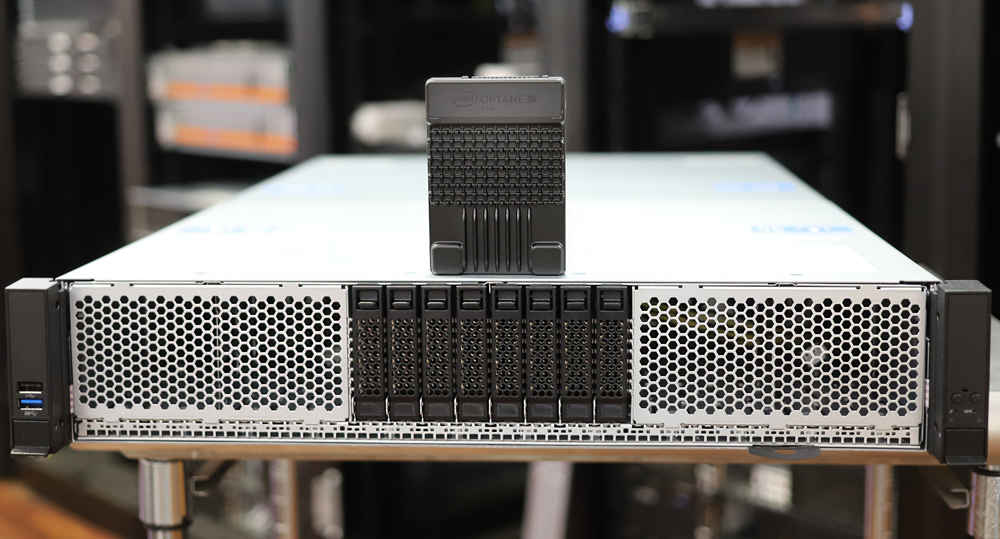 The 10 nanometer-based CPU is delivering up to 40 cores per processor.

Intel produces network-optimized “N-SKUs” to support diverse network environments. The new processors deliver on average up to 62 percent more performance on a range of broadly-deployed network and 5G workloads over the prior generation, Intel says. More than 15 major telecom equipment manufacturers and communications service providers are readying POCs and networking deployments with Ice Lake.

Ice Lake delivers up to 1.56 times more AI inference performance for image classification than the prior generations, Intel says. This makes it suitable for AI, complex image or video analytics, and consolidated workloads at the edge.

Intel increased the capacity of the drive which started at 375GB, tops at 1.5TB. Optane SSDs perfect companion for slower media. we primarily designed for endurance and frequently used in a two-tier architecture. Optane SSDs are often set up to absorb all of the writes in a system, protecting larger, slower media behind it. These can be QLC SSDs for instance, that perform well for read-heavy workloads, but don’t have much endurance or write performance.

vSAN, Azure HCI, StorONE, and many others are well adept at making multi-tier work well.

A way to bridge the gap between volatile DRAM and high-performance SSDs. PMem 200 is quoted to deliver 32% more memory bandwidth than Gen1. New modules are optimized for the new 3rd Gen Intel Xeon Scalable Processors, making the combination, with Intel SSDs.

In the memory bandwidth throughput, with PMem 200 picking up 3,200 MT/s support.

Core count starts at 16 cores and goes up to 40. With the first PMem, users could add 3TB of PMem for a total memory per socket of 4.5TB, now the total is 6TB per socket, with 4TB of PMem 200 being added. The maximum thermal design power dropped from 18W to 15W. And the newest persistent memory comes with eADR, extended Asynchronous DRAM Refresh.

The MemVerge Memory Machine management interface can help administrators through a number of use cases:

The snapshot GUI is used to quickly bring back the database and/or troubleshoot the cause. The database log and Memory Machine Dashboard data determine the time of the crash, allowing the admin to select and restore a snapshot that is closest to the crash time. Developers can then use that restored instance for debugging.

Artists want to explore different options on a base Maya scene. They load the base scene, apply the changes, and save it as a different project. They can save many separate scenes, but to show these options they must be repetitively reloaded, which takes a long time.

Scientists want to experiment with a machine learning algorithm using different parameter settings. They load the data, set the parameter, run the algorithm, and check out the results. if the results are not good, the data is reloaded, a different set of parameters is applied, and the algorithm is run again.

With Memory DVR functionality, load the data once and take a snapshot. From that point on, if the results are not good, restore the base data and another run with new parameters is done in seconds.

Navigator System offers end-to-end data center maintenance services that allow you to extend the life of your IT assets.

MANAGED IT SERVICES are